With “Possible and Imaginary Lives”, Rozenn Quéré and Yasmine Eid-Sabbagh experimented at the place where their photographic worlds meet: they present a rereading of a family photo archive from the perspective of its narrative and poetic possibilities. 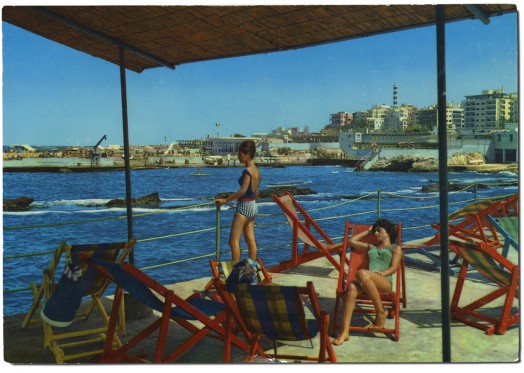 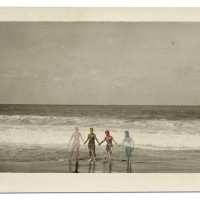 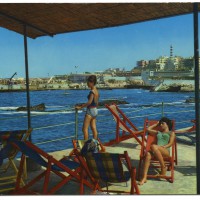 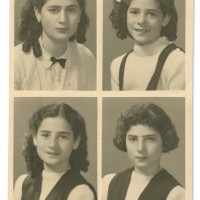 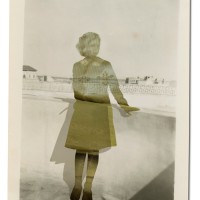 Rozenn Quéré studied cinema and photography in Paris, France. She lives and works in Brussels as a freelance photographer and as a graphic artist. Her personal work is geared to the relationship between photograph and text, photomontage and narration, by way of different media. With Perrine Lottier she has created photo-based films (L’homme envolé, produced by Groupe de recherches et d’études cinématographiques, and Gabrielle, produced by Les Films d’ici and Xbo Films). She is also the author and illustrator of two children’s books with the publisher Mouton Cerise and two art books with Les éditions Malaxe.

Yasmine Eid-Sabbagh studied history, photography and visual anthropology, also in Paris. From 2006 to 2011 she lived in Burj al-Shamali, a Palestinian refugee camp next to Sour, where she carried out photographic research that includes a dialogical project with a group of young Palestinians as well as archival work on family and studio photographs. Since 2008 Yasmine Eid- Sabbagh has been a member of the Arab Image Foundation, and since 2011, a doctoral candidate at the Academy of Fine Arts in Vienna.

With Possible and Imaginary Lives, Rozenn Quéré and Yasmine Eid-Sabbagh experimented at the place where their photographic worlds meet: they present, through the prism of the dialogue with the characters in the story themselves and that of the photomontage tool, a rereading of a family photo archive from the perspective of its narrative and poetic possibilities.

The project Possible and Imaginary Lives won the Vevey International Photo Award, in 2011, and the Arles Discovery Award in 2013.

“This is the story of four strong and feisty woman, exiled to the four corners of the globe, four Palestinian-Lebanese sisters who traversed the 20th century. It is a story somewhere between documentary and fiction, biography and drama, based on family photographs and taped interviews – a narrative of both actual and imagined events.

“It is a reflection upon ways of gathering, sifting, listening to and making stories and words emerge. It is a reflection upon how to recreate these stories and words in the present, in the most vivid possible way, by combining the inner experiences of these women with the lived experiences of the gatherings. Herein is a reinterpretation of reality tinged with tenderness and humor. The four women’s and the two photographers’ imagination is at the core of this work.

“Jocelyne, the eldest sister, lived in Cairo. Frieda, the youngest, went into exile to Paris. Stella left Lebanon for New York during the civil war, and her twin, Graziella, is the only one to remain in Beirut.

“Far from being a factual or historical portrait of Graziella and her sisters, Possible and Imaginary Lives is an attempt to convey the eccentricities and delusions of these women, so as to give their imaginings a status equal to that of reality. In other words, by combining old family photographs and text, we were not aiming to write their story, but to write their myth.”

Produced by the visual-arts festival Images in Vevey, Switzerland, Possible and Imaginary Lives was also published by Éditions Photosynthèses, Arles, France, in 2012.