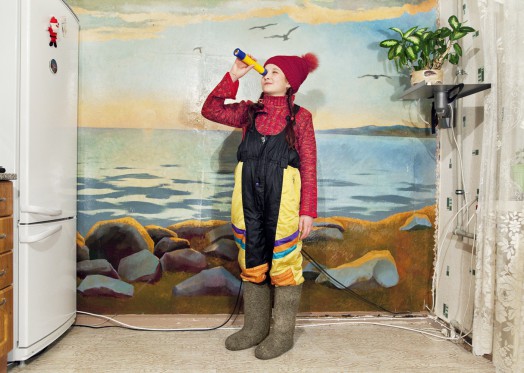 Born in the Arctic town Tiksi in Russia in 1985, she was eight when the Soviet Union collapsed. Her family then moved to Yakutsk, a city with extreme subarctic climate; the coldest winter temperatures for any city. Filled with “surreal childhood memories”, eghteen years later, she returned to Tiksi to capture this special place “in the middle of nowhere.” 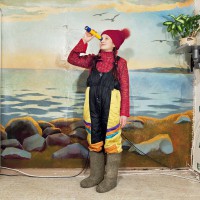 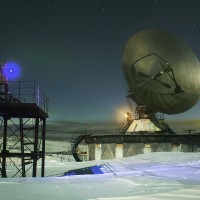 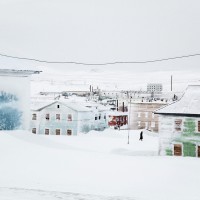 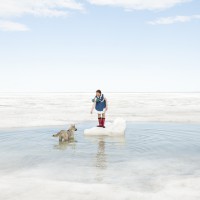 EXHIBIT AT THE RENCONTRES: TIKSI

“Once upon a time in Siberia, on the shores of the Arctic Ocean, in a warm bed in a small town, a little girl woke up from a dream. It was morning, but it was still dark out, for the little town was so far North that the sun would not show itself for many months. They called this the Polar Night.

“The little girl rubbed the sleep from her eyes and dressed in the dark. She put on her pink jacket and red stocking cap and stepped outside. Her breath froze and she walked in the direction of school. All around her were endless fields of frozen tundra. But the fields were not white like you might think, for up above the Aurora Borealis lit up the sky. It looked like a big green breath frozen in the heavens and all around the little girl were beautiful colors. The snow was painted green. And on some mornings—if she was lucky—she’d even see bits of blue, yellow and pink on her walk to school.

“She loved these colors very much. Walking through them made her imagination come alive. She liked to think of the fields as blank canvases for Mother Nature to paint upon. And what did that make her? Was she part of the painting too, in her pink jacket and red hat?

“She smiled and her mind began dreaming of the days when the Polar Night would come to an end, when the first sun would light up the snowy mountains, making it look like blueberry ice cream. And then the summer would come, the snow would melt and the tundra would transform into planet Mars with it’s golden color seeming to stretch out forever in every direction.

“She thought to herself, “Every season has its own colors.” She stored all these colors in her heart, and walked beneath the Aurora Borealis in this little town way up North.

“The town was called Tiksi.”