Dina Goldstein is a Canadian photographer and Pop Surrealist with a background in documentary photography. 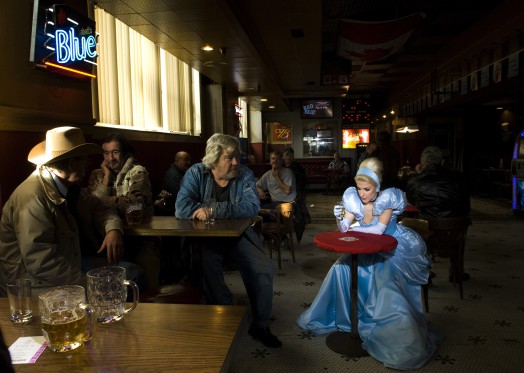 She creates visual series that place the mundane and everyday in unusual settings to inspire insight into the human condition. Her two recent projects are Fallen Princesses (2009) and In the Dollhouse (2011).

Fallen Princesses is an ironic look at children’s parables, from Grimm fairytales to Walt Disney. By placing iconic characters such as Little Red Riding Hood or Snow White in modern situations, the series became a commentary on such everyday scourges as poverty, obesity, cancer and pollution.

In the Dollhouse is a series that plays out as a sequential narrative, peeking into the home and marriage of the world’s most iconic dolls, Barbie and her partner, Ken. It offers a profound commentary on the transient nature of beauty, the difficulty of marriage and the importance of authenticity.

These works have been recognized for their metaphorical and ironical messages, which transcend cultural borders, and have sparked much in the way of conversation and accolades from academics, editors and bloggers around the world.

Dina Goldstein is currently in production on her third large-scale tableau series, Gods of Suburbia. 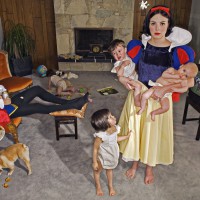 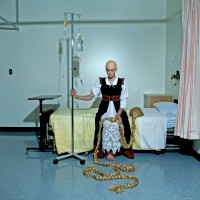 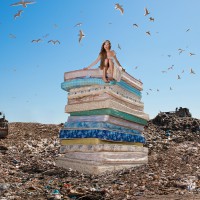 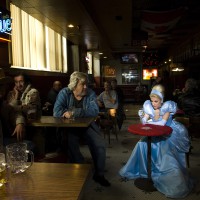 “Jordan, my daughter, was three at the time and was just starting to get into the ‘Princess phase.’ Around the same time my mother was diagnosed with breast cancer. The two events collided and made me wonder what a Princess would look like if she had to battle a disease, struggle financially or deal with aging. I began to challenge the “Happily Ever After” notion and gave each iconic “Disneyfied” Princess a modern persona and narrative. My mother thankfully recovered and is cancer-free today.

“I photographed the first of the Princesses, Cinder, in 2007 and realized the project in 2010. I first exhibited Fallen Princesses in 2009 at the Buschlen Mowatt Gallery in Vancouver.

“The show did not include Pocahontas, which I had to complete later, as I just had my second baby, Zoe (2009), so I took a bit of a break.

“During that time I shared them on JPG.com, and shortly after that they were distributed on the Internet.

“The initial response to the series was overwhelming and exciting.

“I received hundreds of emails and letters (they used to send letters back then). People poured out their hearts and shared intimate stories with me. I was very touched.

“I was featured in over 300 online publications and 100 print magazines and newspapers. I also reluctantly made several TV and documentary appearances.

“The work has been exhibited in public galleries and museums internationally.

“In 2010 I was approached by a well-known film director to create a Fallen Princesses TV series. That didn’t end up happening. However, many other fairytale-based films and shows were later produced.

“In 2010 I published the Fallen Princesses book, which is a compilation of essays, interviews, letters, online discussions and anecdotes about the series.

“Fallen Princesses remains a bit of a phenomenon and has a large, dedicated, and passionate following.”