Rencontres is carrying on its networking efforts with different national and international events, artists’ centers, galleries and maisons de la culture in order to offer the artists we host new locations for dissemination and creation. 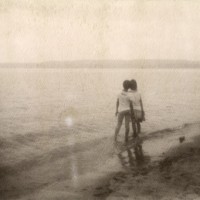 THE ELSEWHERE OF THE OTHER

“The subject of this research is the invisible, the link between geography and the imaginary, between bodies and landscapes, the connection between the history of each person and that of Humanity, between everything that lives and the Universe. Artists use their lucidity, their sensitive relationship to others and to the world to grasp the subtle exchanges among beings whether present or absent, to account for fragile and decisive moments. Suspended time, silences, nothing to see, only knowing that at each instant the vast field of possibilities opens up to us.

“The elsewhere of the other in oneself.

“The elsewhere of a man loved, dead, his soul and the hereafter.

“The elsewhere of a man adored, departed, his territories and his visions.

“The elsewhere of the other would be the powerful capacity we all of us possess to be reborn, to rebuild, and to give.

“These photographs are those of a woman of an unvanquished heart.”