Alain Paiement looks at the world with the tools and methods of a geographer. His multidisciplinary work has evolved from painting to architectural photography, with a continued interest on his part in cartography. 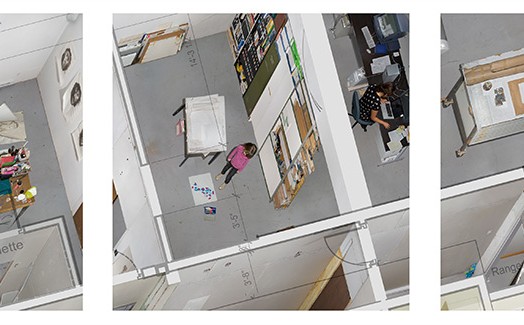 After his exploration, in the 1980s, of the analogies between the surface of painting and that of the earth, his pictorial methods gave way to a photographic approach influenced by cartographic processes. Photography is thought of as a sculptural phenomenon. It is a method for looking at, interpreting and recomposing the observed space, understood at one and the same time as immediate physical reality and as complex and multilayered reality. The re-composition of sites takes into account that complexity of space. In the current work, the surface of the photographic plane corresponds to the surface of the photographed world. The content of the sites represented is often detailed in meticulous collages, which reconstruct living spaces by bearing witness to those who live in them.

Alain Paiement is recognized as an important figure in contemporary photography for his reflecting on the spatialization of photography and on the construction of vision. His work weaves close links with architecture, history and anthropology, bearing as it does on a variety of subjects.

“Three workshops coexist in the image.
Neighbors obligated by montage,
brought together in an impossible angle.

“On the ground, a complex image recomposes the adjacent spaces of an artists’ workshop, a music studio and an auto repair shop.

“Everything in the details of the image was found as it appears. The extras as much as the objects. The absence of staging and the method of assembly are at the same time documentary, archaeological and fictitious. Read more…

“The image is composed of hundreds of shots that are juxtaposed, interlinked and digitally modified. Most of the photos are made with the help of a shift lens. This ‘correction’ of perspective leads to cuttings and distortions of fragments, finally reconstructing the workshops in an isometric perspective. Photographically improbable. The view suggests a design-based 3D extrusion, as in certain video games, lacking both point of view and vanishing point, although it supposes an axis for looking at it. Nothing to do with optical perspective. It’s more a question of outline.

“In setting down this small synthetic portion of my neighborhood, we can circulate around, above and inside the workspaces, in an overview from close proximity. The plane is tilted inside the framing, which accentuates the effect of depth. Possibly of vertigo. Doing a bird’s eye view with our bodies differs significantly from the photomapping flyovers we’ve grown used to on the Internet.” Alain Paiement

“A television set was literally exploded, then put back together in an “exploded view” by photomontage. All its components were photographed, situated and aligned in accordance with an axonometric perspective, in an empty space.

“The photomontage puts together two opposing points of view of this de-composition in slices. They face each other as in a mirror, the reflection not being wholly identical.

“A television set with a picture tube is an analog technology and an endangered species. Here, it is an emblematic object fallen into ruin, methodically analyzed, then traversed by a quasi-scientific projection axis.

“The explosion of the TV is written in the plural. One reveals what the other one doesn’t show.” Alain Paiement