Beatrix von Conta, photographer, was born in Germany and has lived in France since 1975. 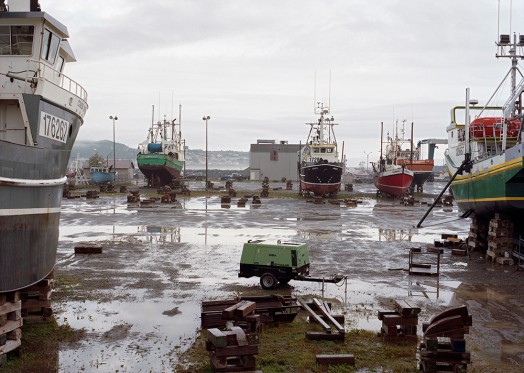 She has been questioning, with a critical distance, the fragility of the contemporary landscape, whose signs, either minimal or prominent, of a progressing mutation she highlights with neither nostalgia nor judgment. The memory of the landscape underlies many of these series, whether the subject be places devastated by natural catastrophes, the traces of the bombardments of 1940 left behind in urban areas, or the messes produced by large construction sites. “L’Observatoire photographique des paysages de Vanoise” (Photographic Observatory of the Landscapes of Vanoise; 2006-2008) would be the first photographic observatory from altitude in France, and in “L’Eau Barrée” (Blocked-Off Water), a long-term project, she tackles in a sustained way the impact of dams in France on waterways and surrounding landscapes. Her work has been represented since 1982 by the gallery Le Réverbère in Lyon, France. 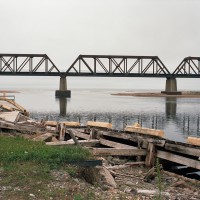 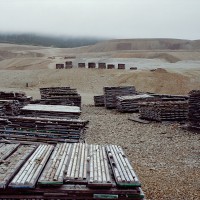 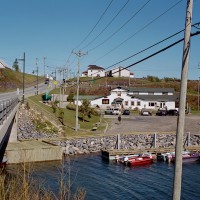 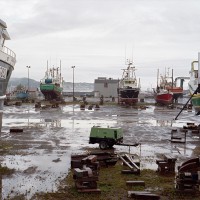 “Photographing the landscape requires a positioning with respect to the world, and every journey to unknown lands embodies a challenge, imposes a posture that I would call the ‘great divide.’ That of finding the right distance, of comprehending, despite the dazzle of the encounter, what seems significant and just in the facets that the real gives us to see.

“My first enchanted encounter with the Gaspé happened in 2011. That experience of the landscape took place, beginning with my arrival, and also in 2012, under a fine and unremitting rain, a gray curtain, sumptuous and velvety, slowing down the entry of images on the photographic stage. An aquatic element in resonance with the land and its broad body of water. It immediately, and radically, reduced to nothingness the deceptive seduction of the initial contact, allowing for the emergence of a secret and unspectacular truth arising from these vast landscapes with their scattered homes, at the same time monochrome and colorful. My relationship with time found itself jolted, the role of the sky magnified.

“A photographic ensemble took shape remote from the stereotypes that the traveler might attribute to this singular area of Québec. ‘The Great Divide’ is no postcard. It explores with a real attachment those subtle and silent landscapes, with their spatial configurations far removed from those encountered on the European continent, but ‘scratched’ more and more by the traces left as a result of human activity.

“My look at the Gaspé complements my photographic approach – with a critical distance, free of nostalgia and judgment – to the fragility of the contemporary landscape, here or elsewhere, whose signs of a progressing mutation, either minimal or prominent, I highlight from time to time. My attention is drawn more towards what expresses the difficult relationship between man and nature these days, that sometimes harshly negotiated cohabitation, the inconsistencies and blunders, without pointing a finger. I consider my photographic work a work of remembrance, an impossible ‘collection’ of unique and precious instants that I endeavor to extract from the approaching oblivion.”
- Beatrix von Conta, April 2013