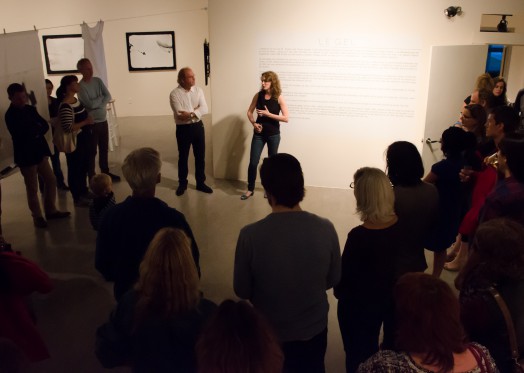 Some 50 artists from the Gaspé, from elsewhere in Québec and from various countries presented their work in 13 host municipalities, over the last two months, on the occasion of the 5th edition of Rencontres internationales de la photographie en Gaspésie. As dismantling of the installations and exhibits takes place, the organizers reckon that this 5th edition has established the importance of the event beyond question.

“Our associations with French and German organizations, as well as with events, artist centers and gallery owners from Québec and abroad, have all borne fruit,” states executive and artistic director Claude Goulet. “These activities have made it possible to inscribe Rencontres and, because of that, the Gaspé itself, in an enormous network at the service of artists and of creation.” Rencontres truly took its place this year among the great photography events, nationally and internationally. “We’re collaborating with among others the gallery C/O Berlin (Germany), FotoFest in Houston, Texas, the gallery Le Réverbère in Lyon, France, but also, in Québec, with Joyce Yahouda Gallery and Maison de la culture Frontenac in Montréal, and with Espace F in Matane.”

The artists, researchers and other professionals in the visual arts who took part in the roundtables of the Photographer Tour, which ran from August 15 to 19, also proved to be excellent ambassadors for Rencontres and for the region. More and more recognized artists from around the world have positive echoes of the event and are happy to travel to the Gaspé to take part in it. “Some of them carry out creation residencies here,” Mr. Goulet reminds us. “The result of their work is then disseminated not only in the Gaspé but elsewhere in the world as well.”

The standing of Rencontres was also heightened thanks to a broadened media coverage, notably in the major daily Québec newspapers, in addition to magazines and specialized websites like L’Œil de la photographie (Paris, France), Profession Photographe (Le Mans, France), Actuphoto (Paris, France), Ciel variable (Montreal), Vie des Arts (Montreal) and Photo Solution (Québec City). Moreover, record traffic was recorded on the website – with 34 percent of visitors hailing from abroad – as well as on the Facebook page and the Rencontres Vimeo account.

Towards the 6th edition…

The artist residencies held as part of Rencontres allow the Gaspé territory to be used in the service of creation all year long, above and beyond the summertime activities. From September 20 to October 3, photographer Bogdan Konopka – Polish-born, based in France – will carry out a residency in Gaspé territory. His work will be exhibited in the region during the summer of 2015 at the 6th edition of Rencontres, and the same season in France, at Promenades photographiques in Vendôme.

It will be recalled that for six years, Rencontres internationales de la photographie en Gaspésie has undertaken, with artists and with their partners, the major project of establishing itself throughout the territory and creating each year a true circuit devoted to contemporary art. In championing photography, its language, its codes and its various esthetics, the event has put in place an organization stretching over 800 kilometers, in 21 sites distributed in 14 host towns.