The Photographer Tour, presented as part of the 5th edition of Rencontres internationales de la photographie en Gaspésie, will run from August 15 to 19 in different municipalities on the peninsula. At the heart of Rencontres, the Photographer Tour is a one-of-a-kind event that brings together visitors, photographers and the local population on the Gaspé territory. It offers public get-togethers on the subject of creation in the form of photo…

In Partnership with the Collection Loto-Québec 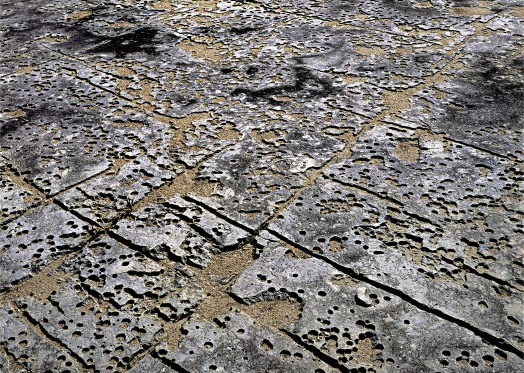 The theme of this 5th edition of Rencontres internationales de la photographie en Gaspésie – “Visible. Invisible.” – gives free rein to the interpretation we bring to the photograph, to what it embodies in our day-to-day life, in our relationship with the real and our perception of the world. The theme also serves as a pretext for presenting the body of work of the different artists taking part in this year’s Rencontres….

The Higher Ground photograms (Michael Flomen) are the results of a dialogue between the artist and Nature, specifically fireflies. The large-format film documents the interaction of energies with the natural elements at night directly in the countryside, fixing the natural light of the firefly. The best time to view this installation is at dusk and during the night. This is time when the actual photogrammes were made and when the…

Montreal artists Patrick Dionne and Miki Gingras were invited to do a residency in the town of Percé in 2014 with the goal of creating a participatory photographic work with the local communities.  In the course of that residency, which took place in the spring of 2014, the  two artists’ interest came to focus on Bonaventure Island and its history.  Seeking out former residents of the island, today transformed into…

The 5th edition of Rencontres internationales de la photographie en Gaspésie presents, starting in mid-July, the exhibits and installations of some 50 photographers from the Gaspé, from elsewhere in Québec and from various countries. The public is invited to view them until mid-September in 13 host municipalities. This year’s theme – “Visible. Invisible.” – gives free rein to the interpretation we bring to the photograph, to what it embodies in our day-to-day…